Toward regeneration of the brain and spinal cord

Our goals are to understand neuronal molecular controls and mechanisms, and apply developmental controls toward both brain and spinal cord regeneration and directed differentiation. This biology informs our understanding of neuronal specificity of vulnerability in human neurodegenerative and developmental diseases.

To that end, our work focuses on: 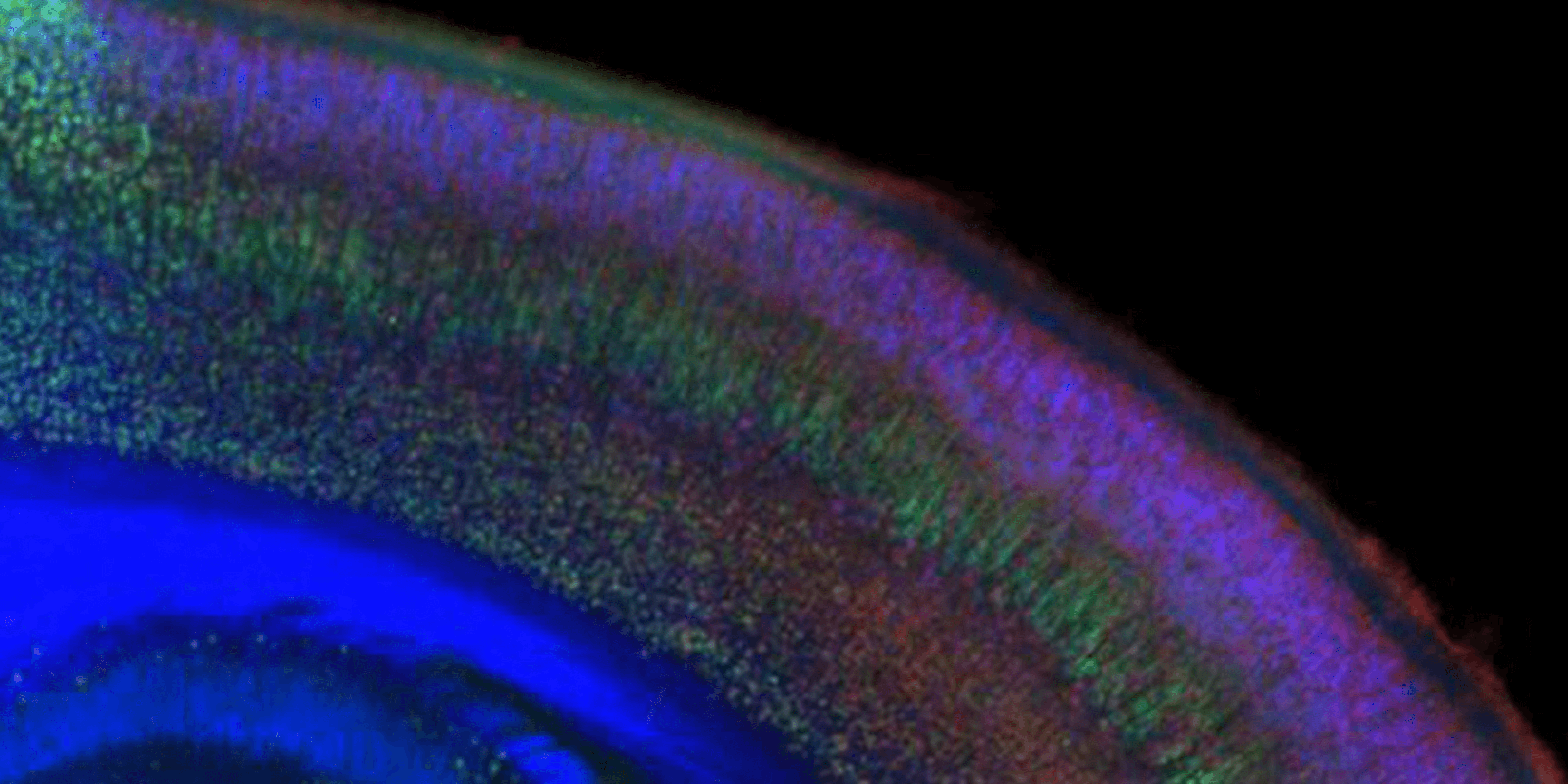 Our lab is interested in elucidation of molecular controls that direct subtype-specific specification, development, and diversity of cortical projection neurons, in particular corticospinal motor neurons, callosal, corticothalamic, and corticostriatal, and diverse sub-subtypes with unique circuitry.

This work contributes to understanding development, organization, function, and evolution of cortical circuitry, and toward directed differentiation of neural progenitors or ES/iPS cells, regeneration, reprogramming, induced neurogenesis, and identification of disease genes. 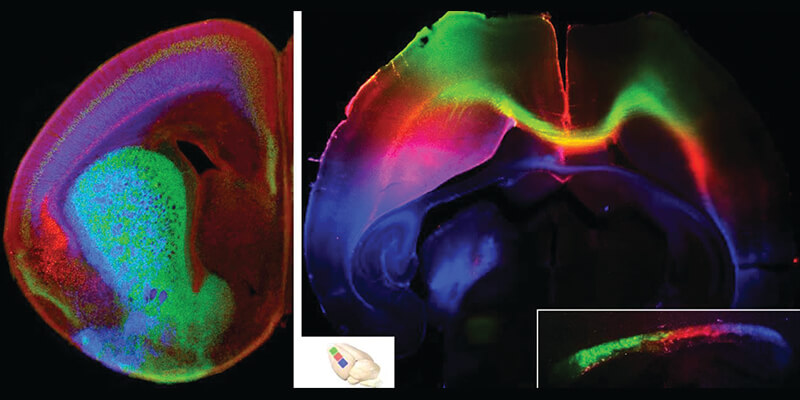 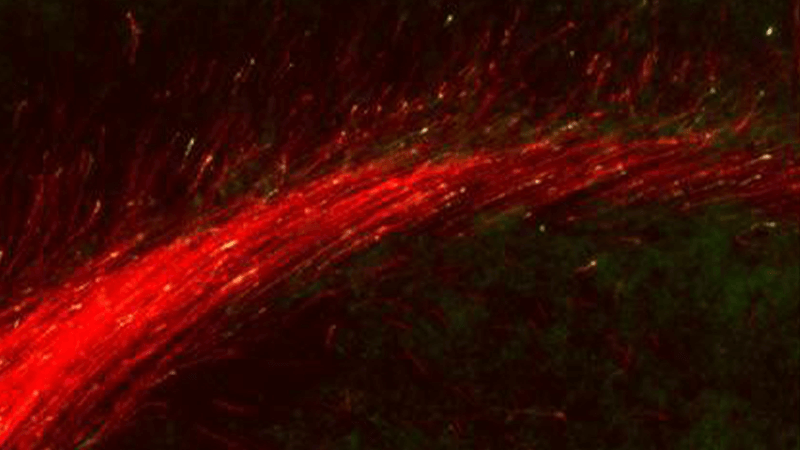 A central question in neuroscience is how function-specific circuitry is established, maintained, and modified for remarkably diverse neuronal connections — a question that has remained inaccessible in multiple core aspects, including the in vivomolecular composition of growth cones (GCs) of specific neuronal subtypes at specific developmental stages.

Because GCs often navigate 103 or 104 cell body diameters from their parent somata (105 in humans), capacity for autonomous behavior without feedback from the nucleus would enable more rapid and spatially precise responses to extracellular cues. Such autonomous function has been documented for decades, with experiments that showed accurate growth of axons after severing connections with the cell body. GC pathfinding functions have since been shown to depend on tightly regulated local protein synthesis — GCs have a localized transcriptome and translation of specific mRNA species is regulated by exposure to extracellular cues. However, most current knowledge of GC biology has been identified in vitro, often with heterogeneous populations of neurons.

Our laboratory has developed an innovative new approach to isolate GCs from the developing brain in a stage- and subtype-specific fashion, as access to specific populations of GCs during normal or perturbed development will substantially elucidate molecular bases of cortical circuit formation. This approach, combined with state-of-the art RNA-sequencing and mass spectrometry, enables unbiased, high-throughput identification of molecular networks that directly implement neuronal circuit formation in the CNS. Elucidating these local molecular controls over GC biology is therefore of substantial importance toward understanding development, organization, maintenance, and disease of subtype-specific circuitry. 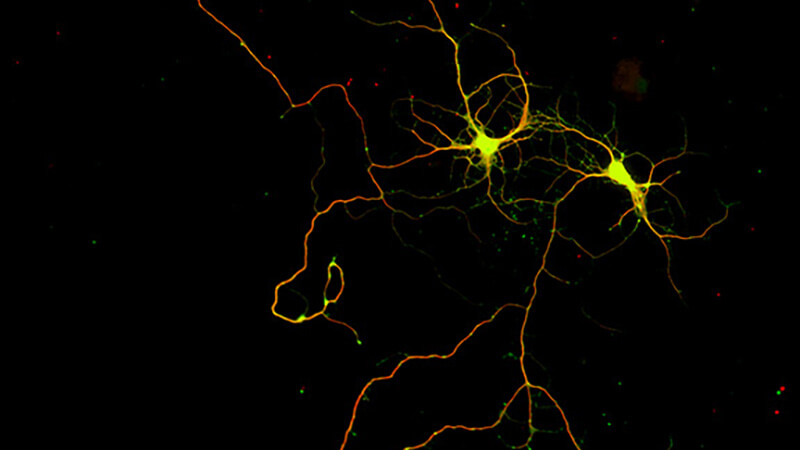 We were the first to manipulate endogenous neural progenitors / precursors / “stem cells” in situ (in adult mouse) to undergo induced neurogenesis, birth of new neurons in normally “non-neurogenic” cortex. We demonstrated that newborn neurons progressively migrate, differentiate layer- and region-specifically, and some extend appropriate long-distance projections, with re-formation de novo of targeted, degenerated circuitry in adult mouse neocortex to thalamus, and a few years later to spinal cord. This was without transplantation. In collaborative work, we also induced behaviorally functional neurogenesis in situ in zebrafinch from homologous endogenous progenitors. We also published the first identification of a function of normally adult-born mammalian neurons (in olfactory bulb)– they uniquely and specifically provide a new form of synaptic plasticity at the cellular level, and undergo specific response enhancement to novel odorant stimuli (experience-dependent modification) during a neuronal critical period, implicating them in olfactory learning and memory, not simply “replacements”.

The evidence that active and quiescent progenitors exist in the adult brain, and the demonstration that new neurons can integrate into preexisting neural circuitry (either from endogenous progenitors or via transplantation of immature neurons), even in the normally non-neurogenic adult neocortex, support the feasibility of cellular repair in the CNS. Complementing these efforts, work from our lab and others has begun to identify central molecular controls over development of broad classes and specific subtypes of cortical projection neurons, in particular CSMN.
The next step toward future therapeutic functional repair of cortical output circuitry is the identification of endogenous cortical progenitors already integrating cortical identity, and their molecular manipulation for directed differentiation into CSMN. Toward this goal, we investigate the endogenous progenitors exist in the adult cortex -their diversity and lineage competency- as well as development of tools and refinement of molecular controls toward generation of new cortical projection neurons/CSMN. Successful integration of new neurons, even at low levels, might help to partially restore function, and ameliorate disease symptoms. 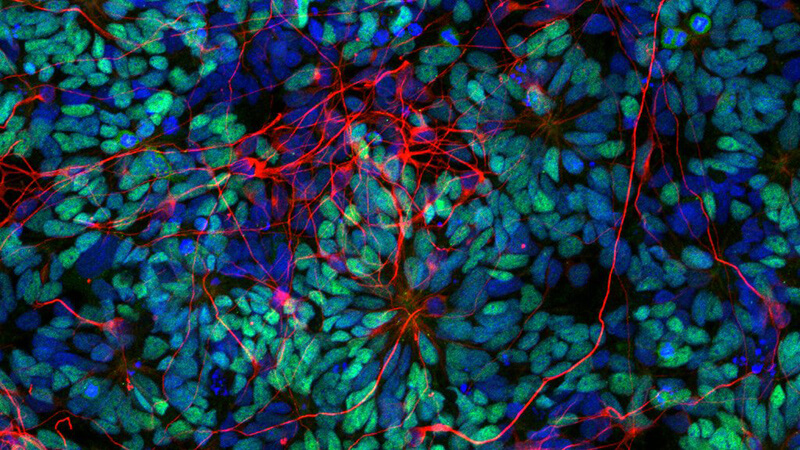 Human pluripotent stem cells (hES/hiPSC) are able to generate many different cells types of the body and hold substantial potential to study human development and disease in vitro. We direct neuronal development of hES/hiPSC into specific neuronal subtypes of projections neurons to better understand what factors control neuronal diversity in the developing human cortex. Our long term goal is to apply this knowledge to generate distinct projection neuron subtypes. Of particular interest to us are corticospinal motor neurons (CSMN) the neuronal subtype primarily affected in amyotrophic lateral sclerosis (ALS). Generating these clinically relevant neurons holds substantial potential for mechanistic modelling, therapeutic screening and potentially cell replacement therapeutic use, such as corticospinal circuit regeneration and additionally enables investigation of mechanisms underlying ALS pathology in the cerebral cortex. 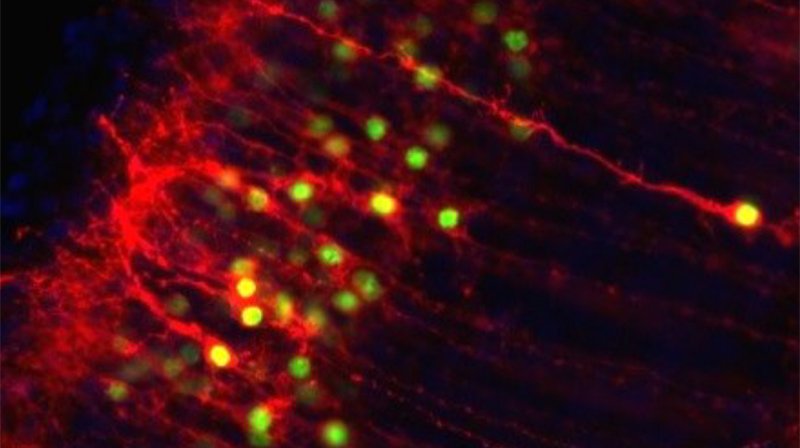 Seth Shipman is collaboratively developing (with George Church, Jeff Nivala) a DNA-based equivalent of a “flight data recorder”– a “molecular memory device” for each differentiating cell, to identify both multi-stage probabilistic and/or rare stochastic events, and to record these into the DNA and read back the transcriptional history of development through sequential checkpoints of appropriately successful neurons, and of cells that make incorrect “choices” and/or that get “confused”, chimeric, hybrid and don’t mature correctly. To elucidate and then potentially control development and maturation of neurons, Seth is developing this capability to record ongoing transcriptional activity as cells/neurons pass through maturational “checkpoints” and phases (appropriately or inappropriately), commit to fates (defined or “confused”), and mature. Ideally, this technology will resemble a “flight data recorder”, enabling molecular interrogation of individual cells’ histories and maturation– not at single, static times as is standard, but throughout maturation– as they progress from pluripotency in culture or progenitor stages in vivo to specific, differentiated neuronal identity, or stalling, or confusion.

We are developing approaches to convert asynchronous development into linear maturational time via encoded molecular clocks. It is important to know the sequence and timing of developmental stage advancement and transcriptional networks, but that is currently obscured by pooled analyses; there is asynchrony of maturation, both in vivo and of cells/neurons in culture, e.g. those derived from iPSCs/ESCs. These approaches and technology will enable synchronization of developmental and maturational analysis via protein timers linked to sequential developmental events, in vivo or in culture. To understand (and potentially control) with optimal precision the transitional moments in acquisition of cell fate and neuronal development and maturation, we should optimally identify and group same-stage cells, at particular maturational stages, for analysis. Understanding transcriptional and other networks that control cell fate decisions endogenously will likely be enabling in driving differentiation of progenitors and stem cells into mature, subtype-defined neurons.

We are developing approaches aimed at discovering neurons’ interaction partners during axonal extension and neuronal maturation, likely reciprocally regulating connectivity and circuit formation. Neurons respond both to peptides and activity at their cell bodies, and in developmentally stage-specific ways to parallel regulators where axons (and dendrites) interact with cells along the way. These interactions are likely critical in advancing through sequential stages of development and circuit formation, but remarkably little is known about these processes in vertebrates. Further, there are likely interactions about which we want to know more than “where and when”, but “what and how” interacting cells signal during normal development– and to identify mechanisms for in vivo and in vitro directed development of subtype-specific neurons and their circuitry.

To enable powerful and currently unavailable or limited genetic mosaic investigation of gene function in complex cellular systems, in particular development and diversity of neuronal subtypes and their complex circuitry in cerebral cortex, we have developed and are further developing and implementing two entirely novel, inter-related systems for genetic mosaic functional analysis. These systems enable binary– all-or-none, neuron-by-neuron “aleatory”– random– mosaic analysis with control over ratios of wt and genetically manipulated cells. These new systems will substantially extend the range of tools available for mosaic analysis. The first is a plasmid-based transfection system, BEAM (for binary expression aleatory mosaic), which generates two genetically distinct, non-overlapping populations of cells for comparative analysis. We are further developing and adapting BEAM for viral use. BEAM can be used directly on wild-type or floxed mice, without the need for complex breeding schemes. We are also a developing a related system of engineered BEACON mice (for binary expression aleatory cre-operated nested mosaic), generating distinct populations of green cells and red cells, with parallel gene modification. BEACON mice can be used to delete genes of interest and/or to activate expression of effector molecules using existing alleles, either throughout the entire organism, or in a specific organ or cell type of interest. The motivating biological goals of this technology development are both to elucidate central molecular controls and regulatory mechanisms over development, subtype diversity, circuit formation, and potential regeneration of neocortical projetion neurons, and to identify potential causes and therapeutic approaches to their dysgenesis and disease.